Meher Chand Market fabled to become the next Hauz Khas Village? Oh lord I hope not. The market is one long strip along the main road. Now windy lanes to get lost in but there certainly is a lot to get engrossed in.
If Chez Nini hasn't already got enough feet wandering to these parts there are now several other reasons to get here. An exclusive bookstore opened by Roli Books called CMYK that stocks a great selection of top notch reads. The funky accessory store Play Clan has set base here too. Along with the talented women's wear designer - Masaba - Im quite a fan of the bright colours and bold prints. Also noticed an adorable children's boutique know as Almirah.

But you're here to read about food so I better get cracking.
Nourish Organics 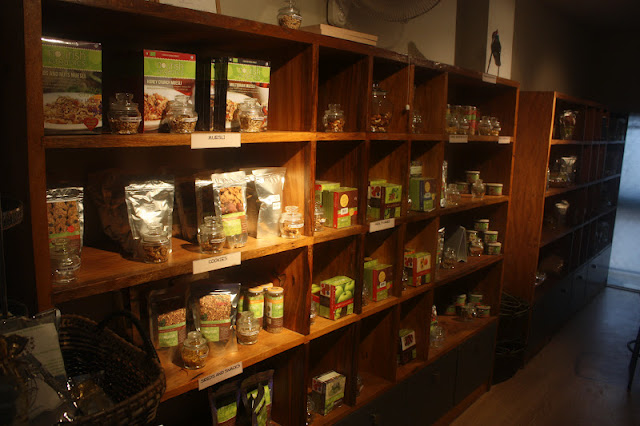 Which was my first stop. I really dont know why I have been going through so many organic places, Im really not that healthy! Sigh the things I do for you crumpets.  So Nourish Organics is a store that sells all sorts of Health Bars, Cereals, Nuts & Seeds and other High Fiber Snacks (cookies, crackers). All their ingredients are pure and natural and organically certified as much as they can be. They keep little jars to try all their goodies and I sure did try. So this is what I thought - Their Health Bars that seem to be their main draw I was not a fan of. Firstly they all tasted kind of the same - fruity, cardboardy (in taste not texture). Since I don't ordinarily gravitate towards this kind of stuff, I am going to give them the benefit of doubt because someone whose food opinion I trust quite likes their Amaranth and Apricot Health Bars. So they probably are good just not for me. The cookies were soggy but regardless the flavours didn't do it for me. What I did like are their Honey Roasted Nuts,  especially the walnuts. They had a nice looking selection of dry fruits - hazelnuts, dried apricots, dehydrated apples that make a wonderful tea. Didn't get to their cereals and granolas or their savoury snacks - masala channa, etc. But heard good things about the Amaranth Muesli, and Thevtrail Mix. 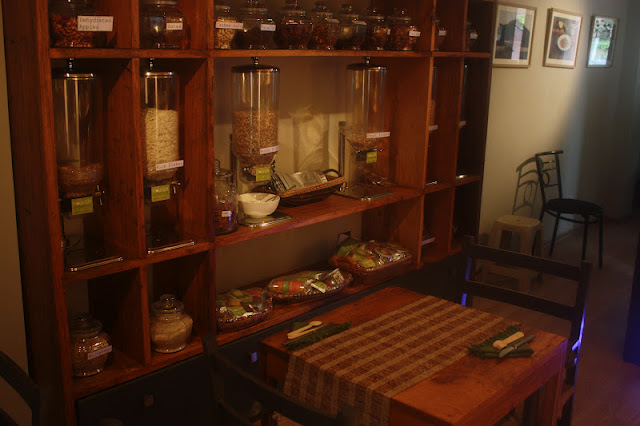 They even have a 2-3 little tables with a small menu comprising of a couple of starters, some salads, one pizza, a burger (veggie I'm sure), and a pasta. An interesting Carrot Cider caught my eye along with a Watermelon Gazpacho Soup, and a Seasonal Cherry Cobbler w/ creme fraiche - yum yum! I didn't actually end up eating here because.. well I was hungry and to me this is snack food not food I can rub my belly in satisfaction after. But thats just me and if this is your thing then hey you have one more option to go explore! Though I may return on a Fat Day to try the above and their raw Zucchini Pasta which I hear good things about too. . .
Kunafa

Next stop a scrumptiously indulgent store full of Middle-Eastern sweet treats. I have been meaning to pop in at Kunafa ever since it opened a few months ago. Apparently Kunafa has chains in Jordan and a couple of other places. The Delhi branch has a few partners (not sure how many)but we were met by Nikhil - after a slightly awkward moment where I quite appropriately got told off for taking pictures without asking - yes I was humbled in to place now shush! He told us their chefs are from Syria and I think Palestine.

They take no chances on quality they get their nuts from Iran; preserved fruit from Syria, Dates from Saudi, Palestine and Jordan, honey from Jordan and coffee and figs from Turkey. Pheuf!


The star here is their namesake the - Kunafa. And in particular the Kunafa Roll Bel Ishta. While their other confectionaries are made every few days (shelf life varies from a few weeks to a few months - even though personally I dont think they taste that good even a few days later!) - The Kunafa, however, is made daily and is their top selling dish (maybe thats why!) stuffed with cheese, cream, topped with crispy vermicelli, pistachio and soaked in honey. It really is divine. I had first discovered this on a trip to Greece where they make a similar dessert but known as Kataifi, which is stuffed with nuts. And it very quickly became my favourite Greek dessert. No wonder this was the first thing I went for.
They make their own vermicelli daily. When I heard this I was so intrigued by how thats done I googled this little video below to share with you guys. Hopefully it'll make up for not having an actual picture of the dish. Definitely get your hands on some of this.


They also had some 16 variations of Baklava. Not sure which were the two they gave us to try but either way they were good. Nice flaky pastry, stuffed with nuts and soaked in honey for that final winning glory!


The next big deal was the Turkish Basbousa. They have 2 other varieties too - the Syrian and Egyptian.   The one below is the Turkish Basbousa - which is essentially a semolina halwa with honey and I believe some rose water, decorated with a single almond on top. I have had better because this was a little dry texturally. Though the flavour was lovely, their divine honey really makes all the difference. And just for that I may give it one more shot. 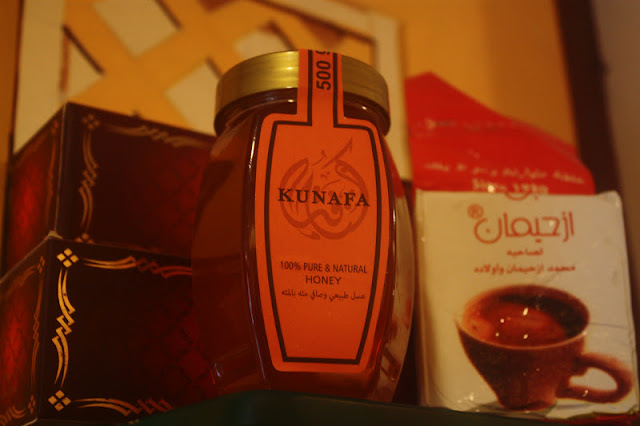 We also tried the Egyptian Basbousa. And I loved it - this should have been the Basbousa Star if you ask me. This version of Basbousa also had some crispy vermicelli on top. So it was essentially a sort of square barfi/pastry that was made of semolina, lots of nuts, honey and a light coating of the vermicelli on top. Dee-liscious!

So overall my Must-Tries: Kunafa Bel Ishta and Egyptian Basbousa.

Make sure you cut the sugar with some great Turkish black coffee.

Of course this place would not be complete without dates. They have a few varieties. Apparently, the Palestinian Jericho dates are most prized. But double check on that one. Im not a huge date fan - neither is my regional knowledge of dates very impressive. So I came across a great blog which had a post on dates, which describes the variation in taste and texture of a few popular dates. Feel free to broaden your mind. http://mykugelhopf.ch/2010/07/ode-to-dates/ 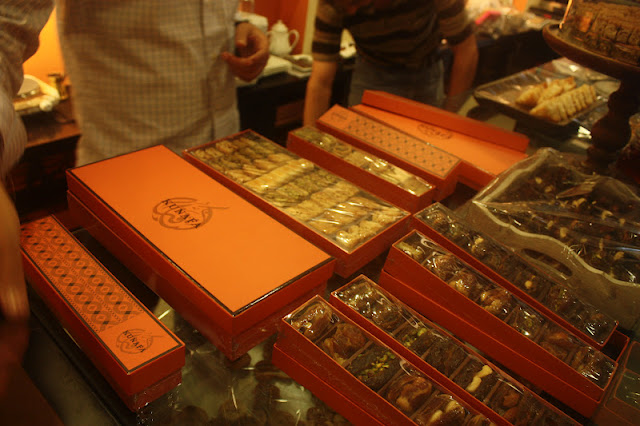